8 Fun Ways to Celebrate Mardi Gras in Your Classroom

Let’s celebrate Mardi Gras this year! I think introducing children to celebrations around the world help them to become global citizens and see beyond the reality that is their home community. I think there is nothing more fun than learning about culture and our world.

I did some research, since Mardi Gras is not a holiday we celebrate here in New York. I want to share with you the history and some activities you can implement in your classroom.

Mardi Gras is well-known to be celebrated in New Orleans, the first time it has been celebrated can be traced back to Rome in the middle of the second century. At that time, it was a celebration where everyone put on masks and praised Bacchus and Venus while having various parties before they would abstain from them during Lent.

The holiday reached the United States first on March 3, 1699 due to French-Canadian explorer Pierre Le Moyne d’Iberville. He camped 60 miles downriver and held a small gala there. A few years later, French settlers started celebrating it in Mobile, a newly founded city located in present-day Alabama. During 1762 to 1800, there were several efforts to prohibit having masked balls and public disguises by the Spanish during their colonization of New Orleans. However, it was then saved as the Mistick Krewe of Comus held a parade in 1857 and put the city on the map.

The festival is usually celebrated on Fat Tuesday but can be celebrated two weeks or more. Fat Tuesday is the day before Ash Wednesday, which marks the first day of Lent, where Christians abstain from forms of excess as a form of repentance for 40 days. During these days, people would hold parades, have parties, and dance to music. Mardi Gras, literarily translates to Fat Tuesday in French.

8 Ideas to Celebrate Fat Tuesday in the Classroom

Now that we have covered where the holiday came from, here are the activities I can recommend to hold your own Mardi Gras celebration with your students.

You can’t have a celebration without a mask. Students can make a mask with art supplies you already have on hand. You can either just print a template and have them use markers to decorate it or you can get more elaborate with sequins, glitter, yarn, etc. Here is a free template you can use in your classroom.

You know how much I love sensory bins! Here is your chance to make a fun Mardi Gras themed sensory bin.  Hit up the dollar store and grab tons of fun items to add to your bin.  You can also add plastic or clay replicas of masks, plastic cakes, necklaces, noise shakers, and jester hats and put it inside a container filled with shredded paper. If you don’t want to do shredded paper, you can also use the easiest filler by coloring rice purple, yellow and green! Then add task cards to make it standards based!

Aside from masks, Mardi Gras attendees wear beaded necklaces around their necks. You can use colored candy, traditional beads, or DIY macaroni beads with a normal string. You can get those little fingers stronger with this fun fine motor activity!

Make party shakers using recycled materials. First, ask your students to bring a used, cleaned water bottle. Second, ask them to paint the bottles however they want using green, yellow, and purple paint and wait for it to dry. Third, give them colored beads of various colors and fill in their bottles up to half. Then, close the cap and let your students shake the bottle while dancing to your favorite Mardi Gras tunes!

My favorite way to introduce anything to kids is through books! There are lots of books you can choose from to celebrate fat Tuesday. Two of my favorites are The King Cake Baby to The Bourbon Street Band is Back  (Affiliate Links). Books always give more perspective especially when you are not from New Orleans or never have participated in this celebration!

Your students have their masks, beads and shakers ready! I think all that is left is to dance and celebrate! I will link to one dance you can play to your students and don’t forget to join in the fun!

Mardi Gras is a holiday that is celebrated for people to enjoy themselves before Lent. We learned that it was brought to us by French settlers and helped New Orleans start off as a cultural center. I hope that different activities in this blog post gave you some ideas you can do with your students so that everyone will have fun while learning more about this cultural holiday.

Speaking of activities, if you are looking for an extra activity to add to your own celebration, check this Mardi Gras Jester Hat Activity Template on TpT.

Do you celebrate Mardi Gras in your classroom? Comment your experience down below. 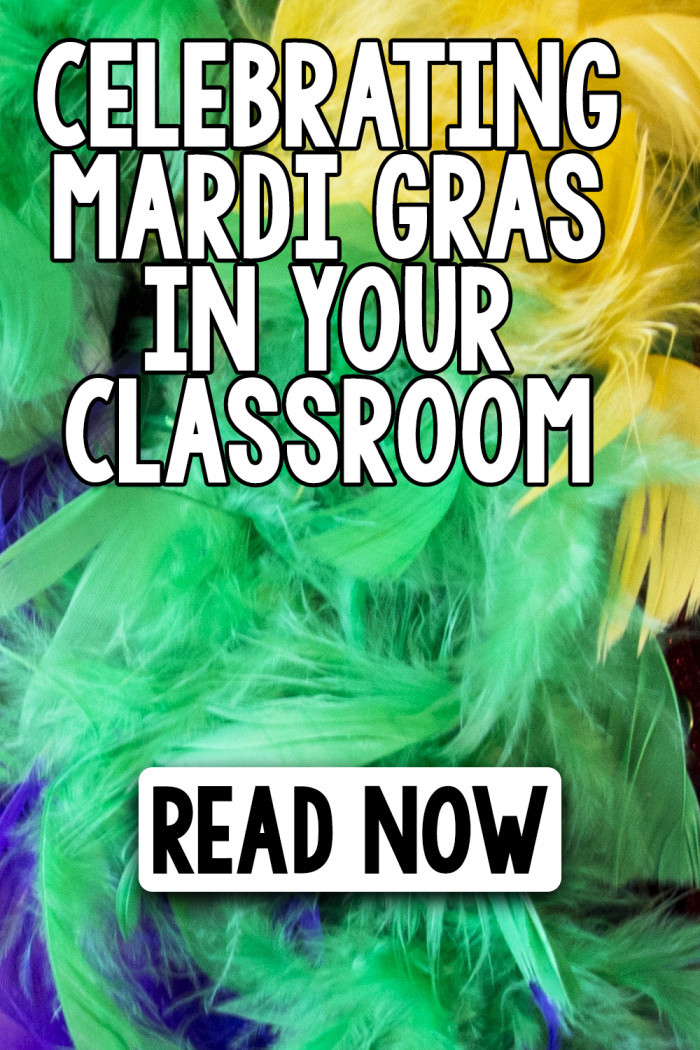